By continuing to visit this site, you accept the use of cookies by Google Analytics for statistical purposes. Read more.

Is temperature an important parameter to consider in CO2 injection?

As anthropogenic CO2 emission must be cut to mitigate global warming, the carbon capture utilization and storage (CCUS) will play an important role to decarbonise energy generation from fossil fuel in the transition period to renewable energy, and to cut emissions of heavy industries for which zero-carbon alternatives do not exist yet, e.g. cement, etc.

CO2 has already been used for years in the US to recover oil, due its very good miscibility with hydrocarbons, in what it is called CO2 enhanced oil recovery (CO2-EOR). However, up to now, this technology has been limited due to the high costs and to the limited availability of CO2. For the same reason, CO2-EOR operations always tried to maximise oil production with the minimum amount of CO2 injected. In a scenario in which CO2 is abundant, and CO2-EOR is used in combination with CO2 storage, the problem can change to maximising the amount of CO2 stored, while improving the oil recovery. This study assesses the CO2 injection temperature as one of the parameters that can change the patterns followed by CO2 when used in EOR, and demonstrates its sensitivity with numerical simulations. The idea has already been presented using thermal compositional simulators [1]. However, the application of this type of simulators to three-dimensional full scale reservoir problems is not realistic due to the high computational cost. In this study a simpler approach based on a Thermal Todd-Longstaff model is presented, demonstrating its ability to describe temperature sensitivity.

The porosity and permeability are made up, however they resemble the geology of a cross section of a real Norwegian reservoir considered for CO2-EOR [1].

The porosity is constant and equal to 0.3. The permeabilities were obtained using base values of PERMX = PERMX = 200 mD and PERMZ = 25 mD. Two high permeability channels were introduced, applying permeability multipliers of 10 and 15 in layers 5 and 10. The final distribution is obtained applying a Dykstra-Parsons coefficient of 0.5, which makes the permeability field heterogeneous for a more realistic representation.

Initially the domain is saturated with light live oil, with a connate water saturation of 0.2. The relative permeabilities and the oil and gas properties are taken from the SPE5 case [2], given for a temperature of 70 C. A temperature dependency is introduced for the oil viscosity, by providing saturated oil viscosities at 2 C, about four times larger with respect to the viscosity values given at 70 C.

The solvent is pure CO2 with pressure and temperature dependent properties computed using the Span and Wagner EOS [3], while viscosity uses a model from Fenghour et al. [4]. Initial pressure is 275 bars with a small variation due to hydrostatic equilibration. Initial temperature is set to 70 C.

A fully completed injector is located at the column (1,1), injecting 230,000 tons per year of CO2. The injection starts two year after depletion, and is carried out for 28 years. The total simulated time is 30 years.

The CO2 delivery pressure and temperature can vary significantly depending on many factors, including economics, distance to cover, surrounding conditions, etc. Peletiri et al [5] provides a literature review of existing pipeline, indicating ranges of [85-150] bars and [15-44] °C, for the operating pressure and temperature. A minimum pipeline pressure of 85 bars is supported to ensure that CO2 remains in a dense phase, while CO2 is often warmed up or cooled down to optimise transport conditions. For this study, a surface pressure of 85 bars and two temperature scenarios were considered, 5 C (cold injection) and 70 C (warm injection). These values are used to compute the energy of the CO2 from the delivery pipeline or from the outlet of a compressor.

Achieving the required bottom hole pressure would require very little or no compression from the surface, as the hydrostatic pressure helps significantly to push the fluid into the reservoir, especially in the case of lower injection temperature for which the CO2 has a liquid-like density. The target surface temperature can be achieved warming up or cooling down the fluid, depending on delivering conditions.

In the well tubing from the surface to the target layer, friction losses and heat conductions with the surrounding environment were ignored. Potential energy changes were also neglected, accounting only for compression effects on the fluid energy changes.

Once the mass of CO2 to inject has been fixed, the first and most important effect of varying the temperature is to vary the reservoir volume injected. In fact, CO2 density decreases as the temperature increases. For an approximate estimate of the reservoir volumetric injection rates in the two injection temperature scenarios, the average bottom hole pressure (BHP) and temperature (BHT) were taken from the simulation results. An average BHP of ~ 86 bars can be applied to both cases, while two different average BHTs are observed:

A producer was placed in the opposite corner of the injector (column 50x50), with an oil target surface rate of 1907 m3/day, and a minimum bottom hole pressure limit (BHPL) of 80 bars. The producer is completed in 8 layers in the lower part of the reservoir, and it is open from start, when depletion begins. Note that a BHPL of 80 bars was chosen to ensure that CO2 remains in its dense phase also at reservoir conditions.

To include the effect of the boundary heat conductions, three layers were added above and below the target layer, with variable vertical spacing (DZ = 6, 30, 30 m). These layers were assigned a very small porosity of 0.001 and zero permeabilities in all directions, as they are considered impermeable.

After some preliminary simulation to understand the temperature propagation into the heat condition boundaries, the most external layers (last of three in each side) were assigned a very high heat capacity to freeze their temperature to the initial value (i.e. 70 C).

When the simulation starts, only the producer is open, and the depletion causes a rapid decline of the pressure that crosses the bubble point. Reservoir gas comes out of solution forming a cap in the the top layers, Fig 1. 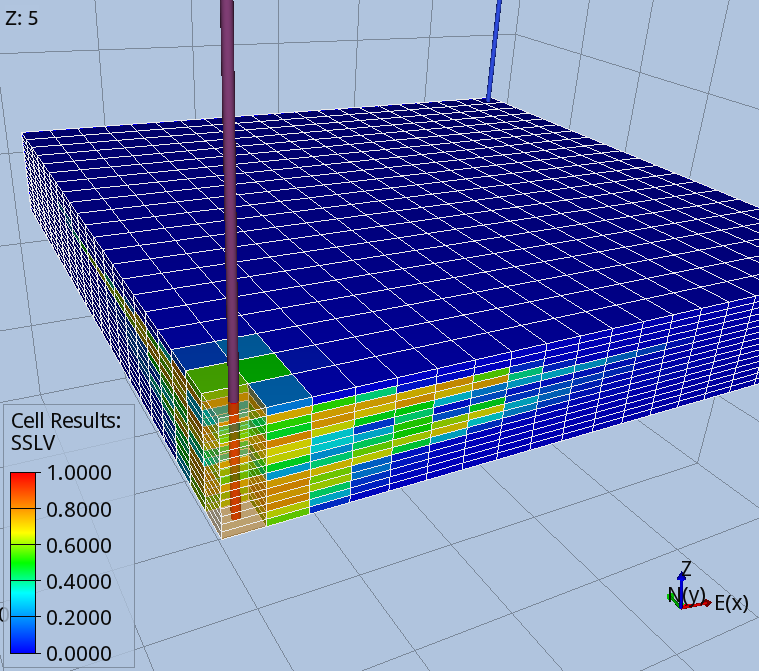 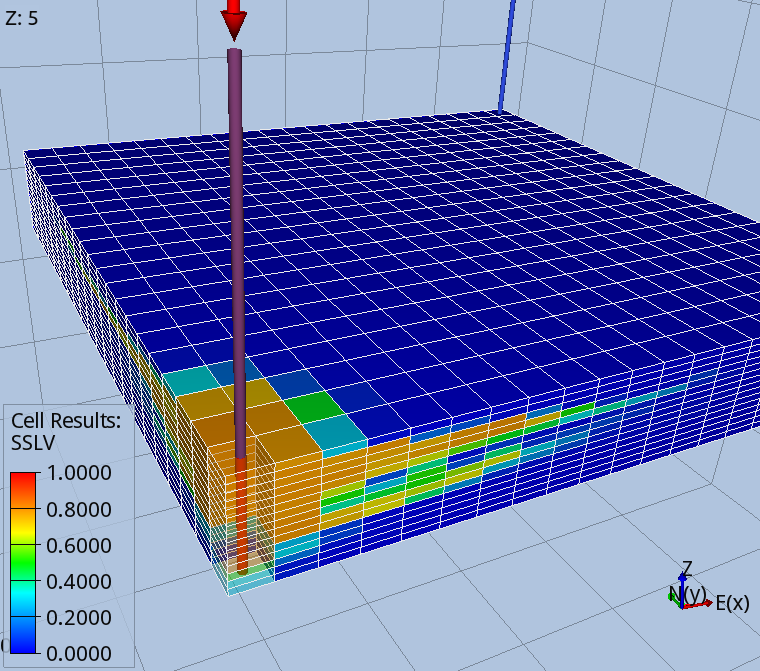 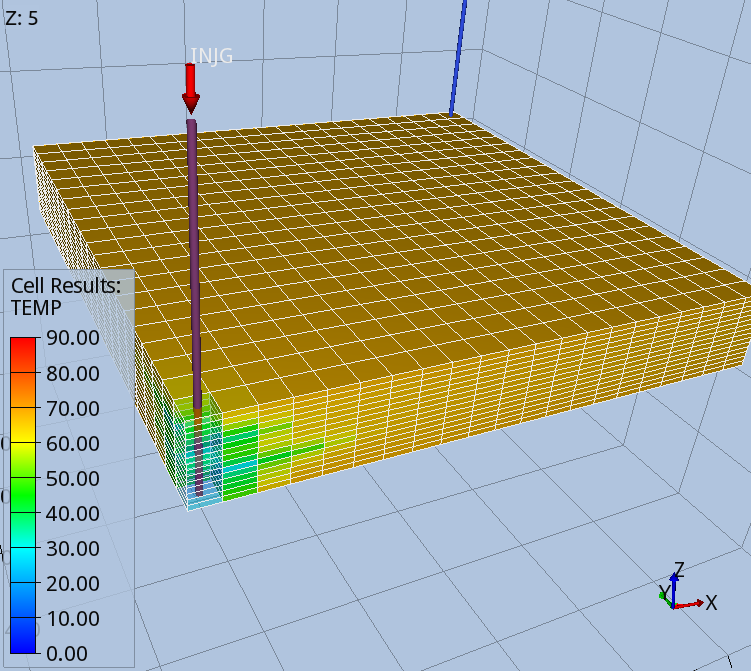 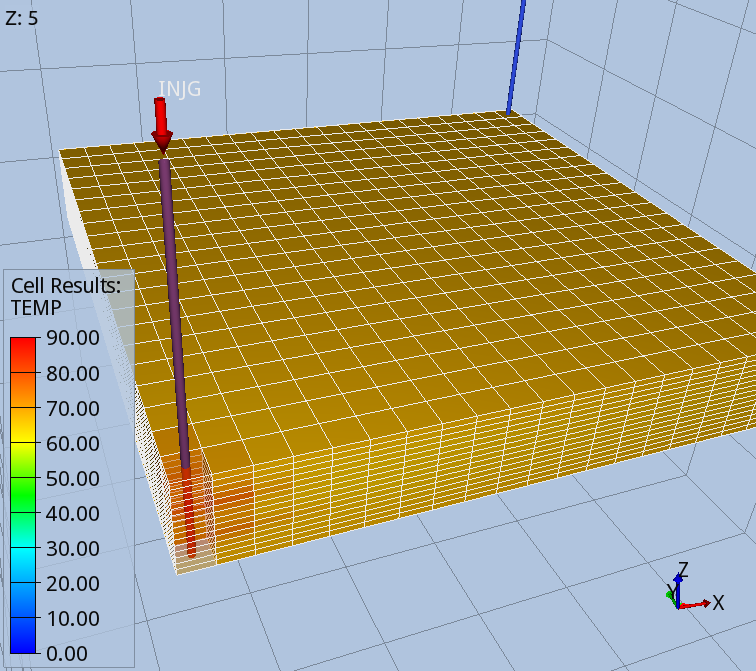 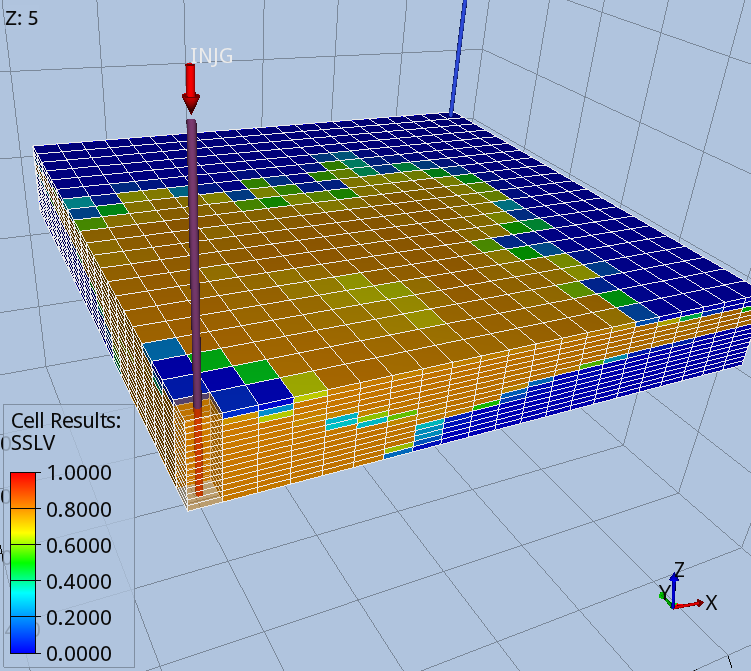 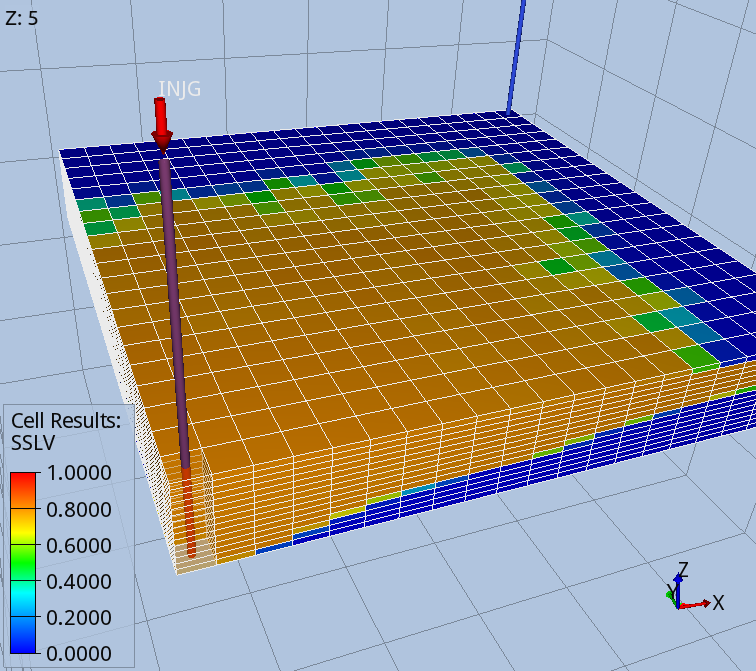 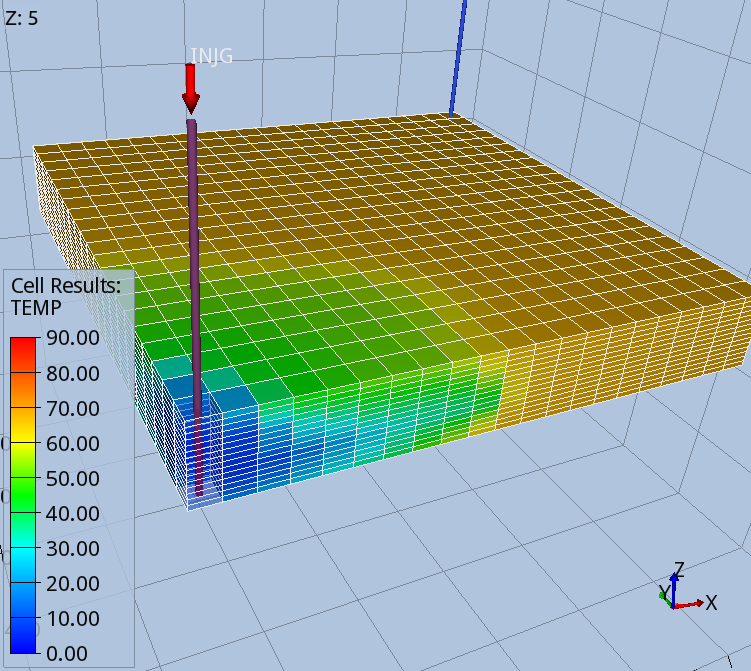 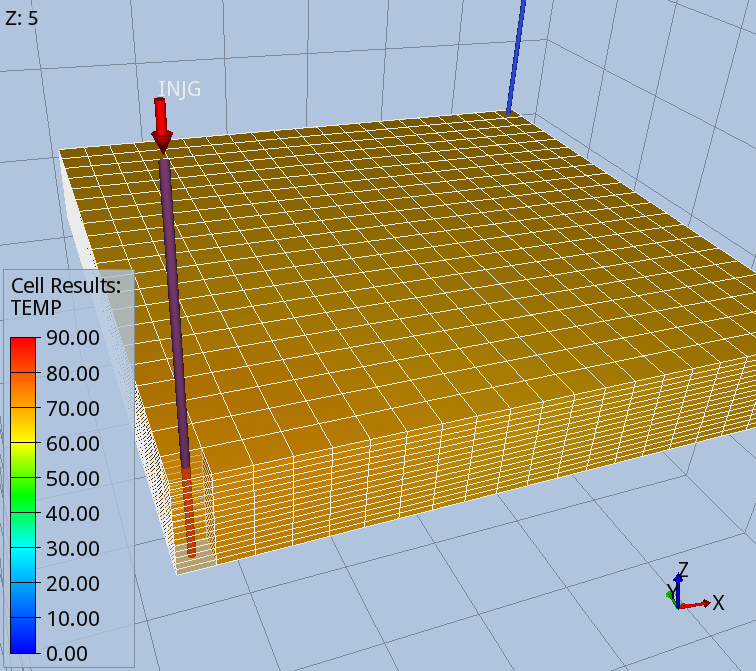 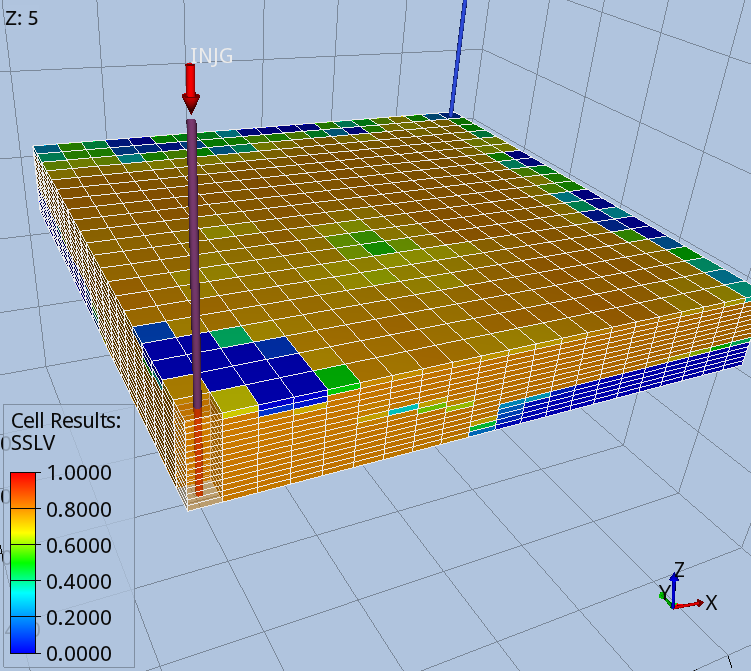 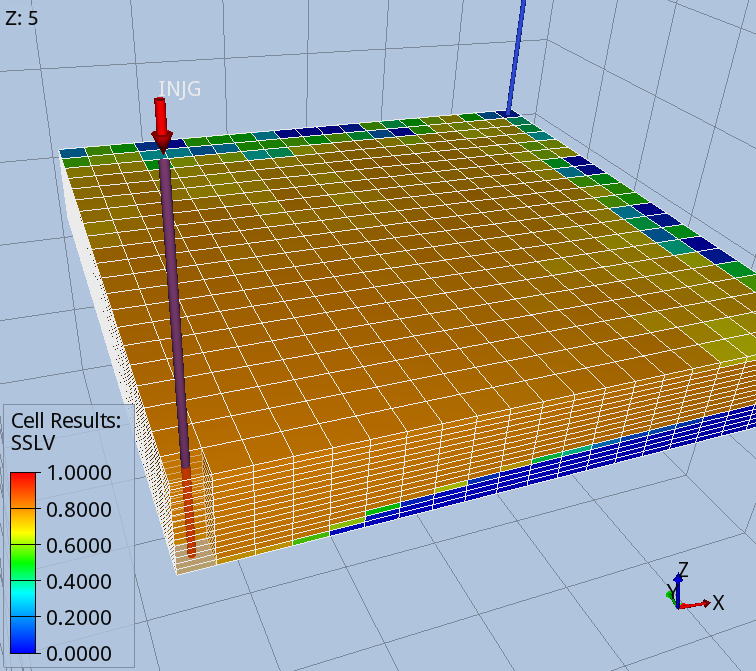 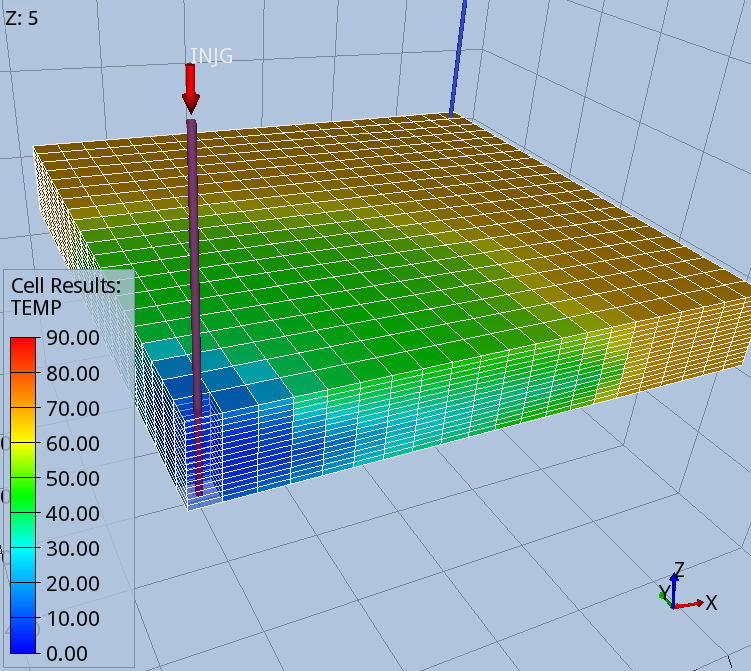 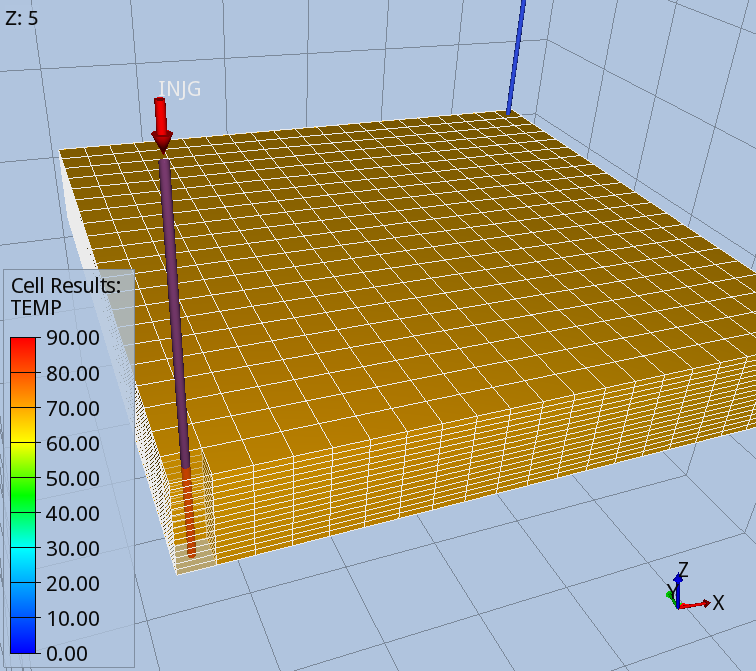 In the cold injection the CO2 tends to by-pass more cells in the upper part of the domain, due to the tendency to sink, as at lower temperature the CO2 density gets larger than the density of the light oil used in this case. However, it also has the tendency to sweep lower layers, which instead are skipped by the warm injection, as lighter CO2 tends to migrate more quickly to the top.

Colder CO2, at the prevailing pressure of this study (~86 bars for both cases), results in an important increase of both density and viscosity from 70 C to 5 C.

In the solvent saturation at 30 years for the cold injection case, the upper layers close to the injector show a region at low solvent saturation, which contains both oil and reservoir gas. Some of this oil was initially by-passed by the solvent flood, but other migrated from underneath layers as lighter than cold CO2. Reservoir gas comes out of solution of this trapped oil as the pressure keeps falling. Some details on these near-well effects are reported in appendix.

The oil residual saturation at 30 years for the two cases are shown in figure 8 below: 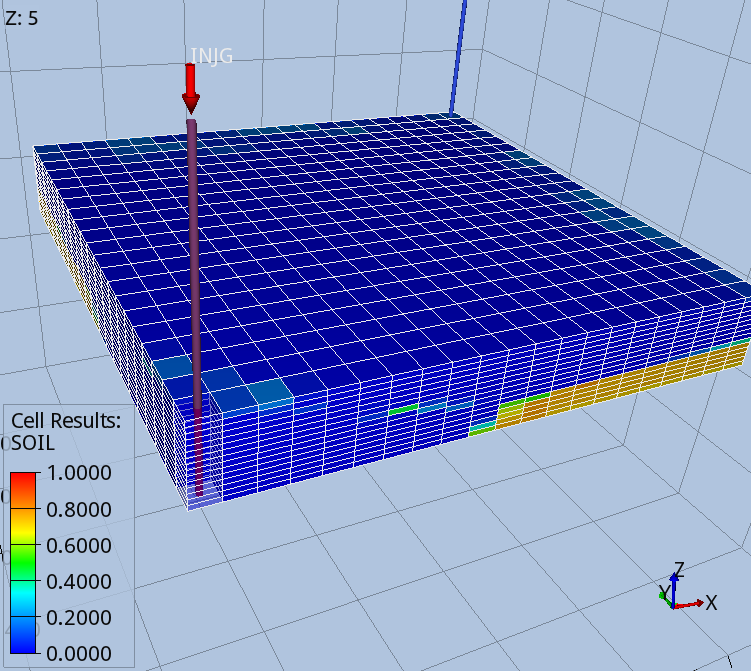 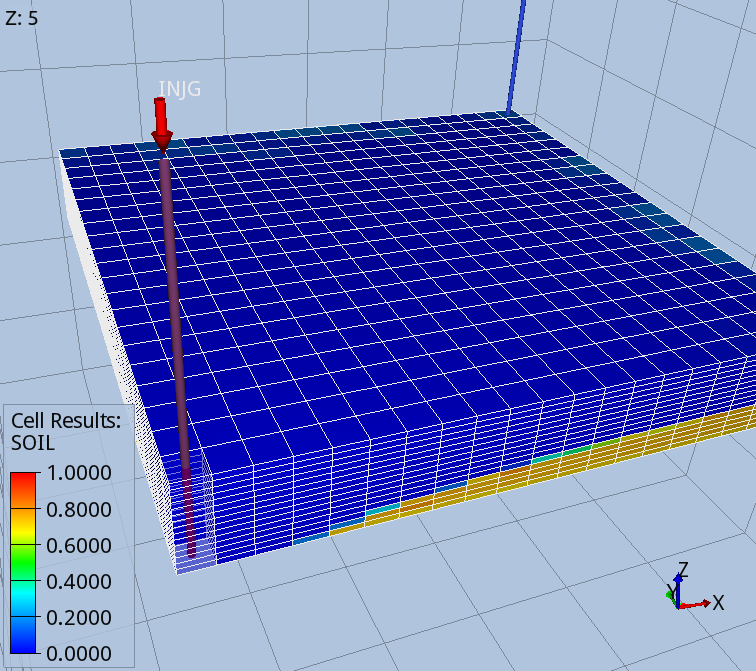 The effect of the temperature in the aquifer above and below the target layer are shown in figure 9. 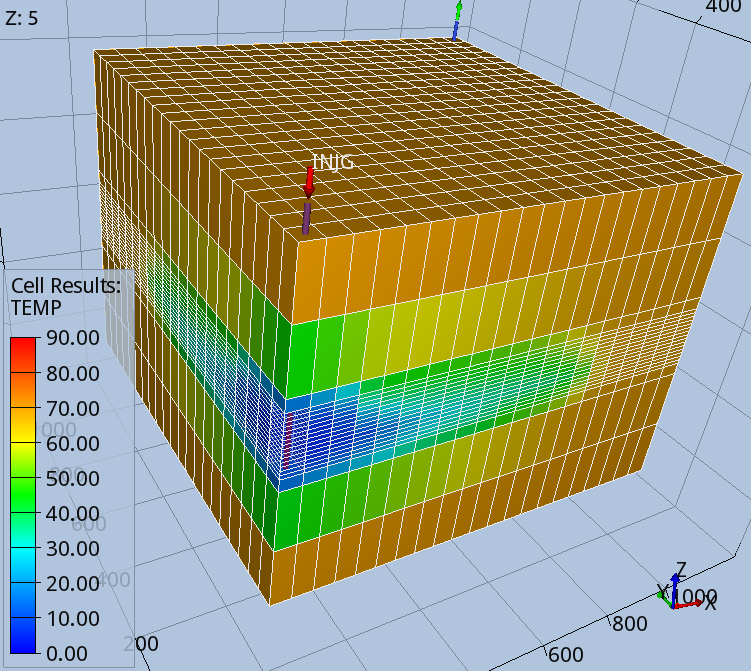 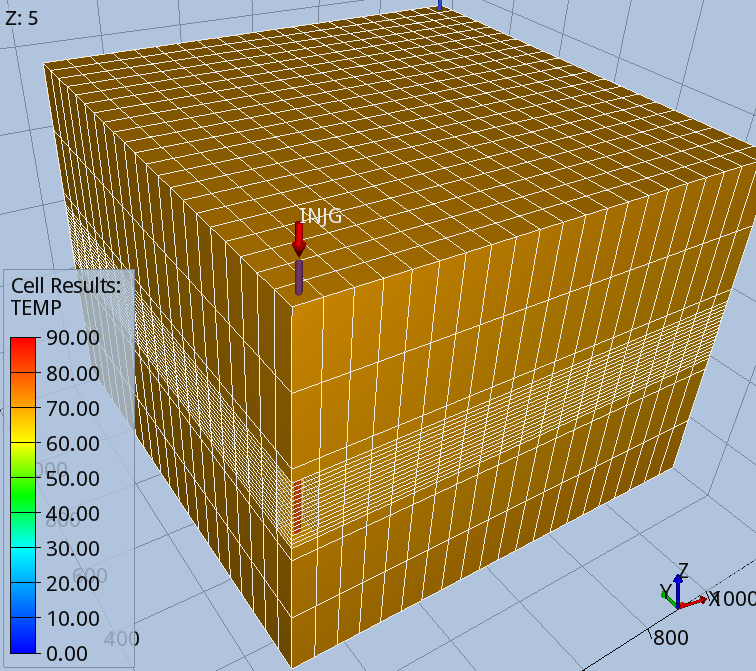 The warm injection occurs mainly at reservoir initial temperature, and has no important effects. However, the cold injection, at a considerably lower temperature than the one initially found in the reservoir, cools down significantly the aquifers above and below the target layers, especially in the region close to the well.

The oil and solvent total production, the solvent production rate, and the Solvent-Oil ratio are shown below. 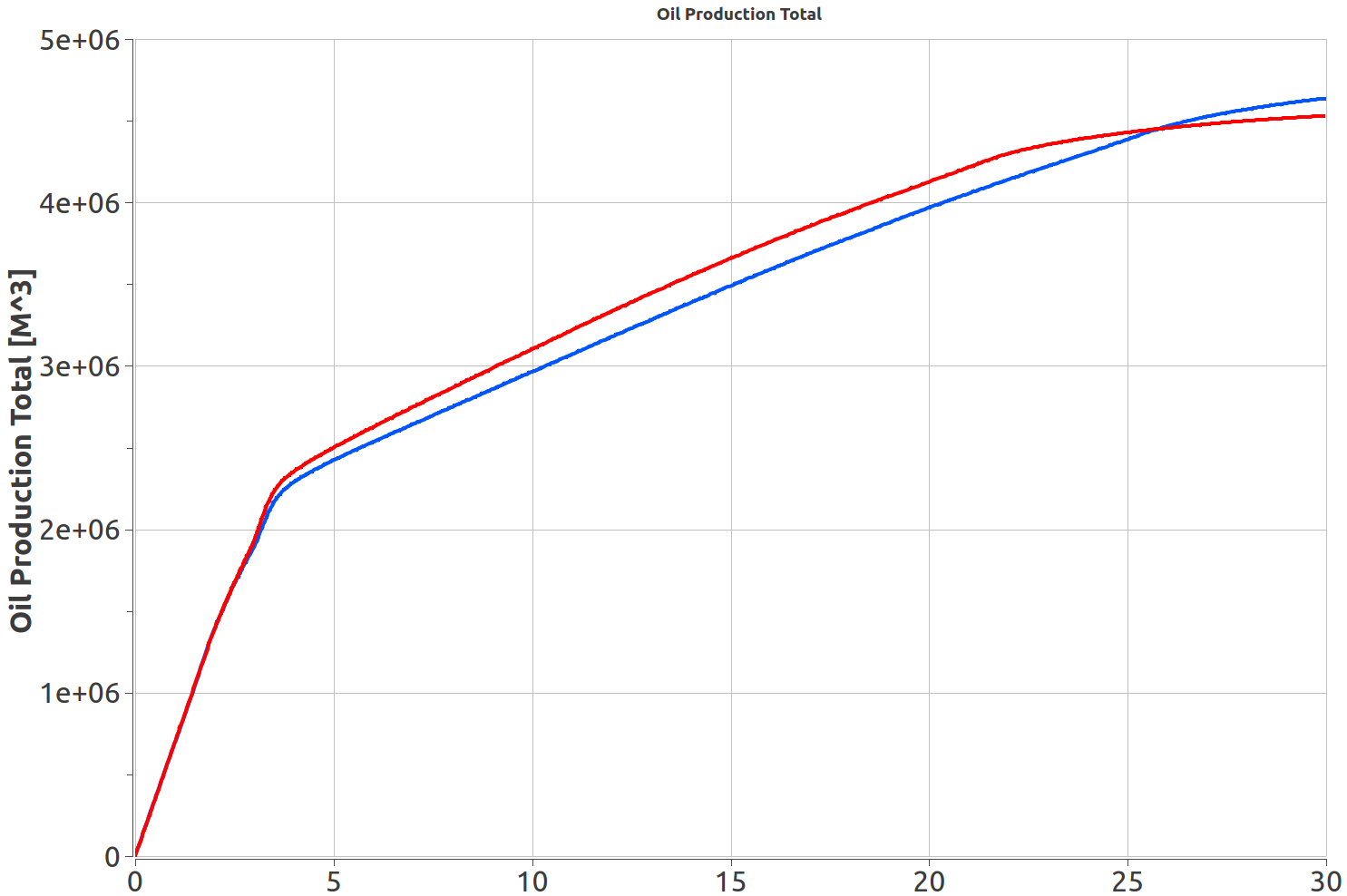 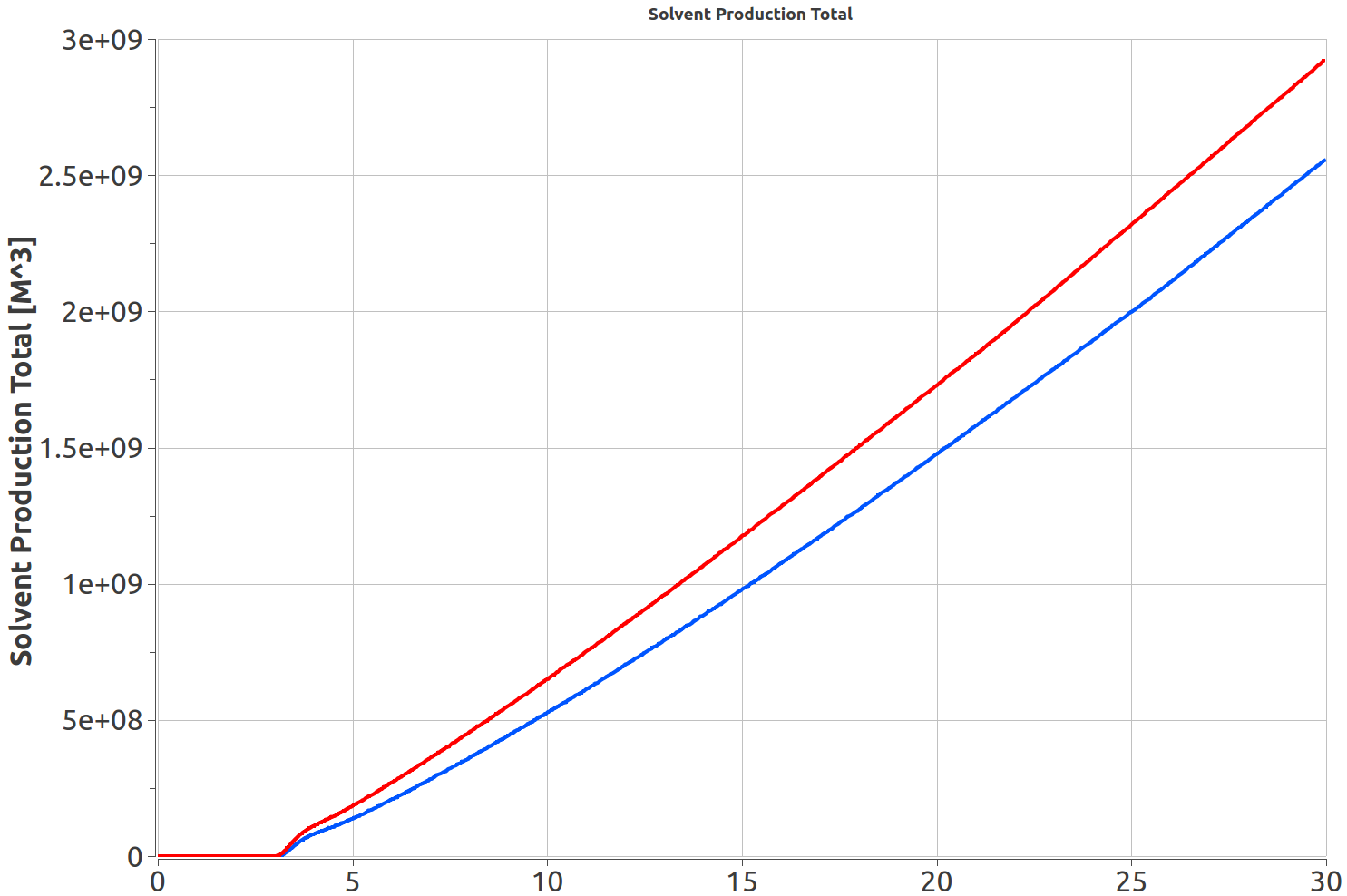 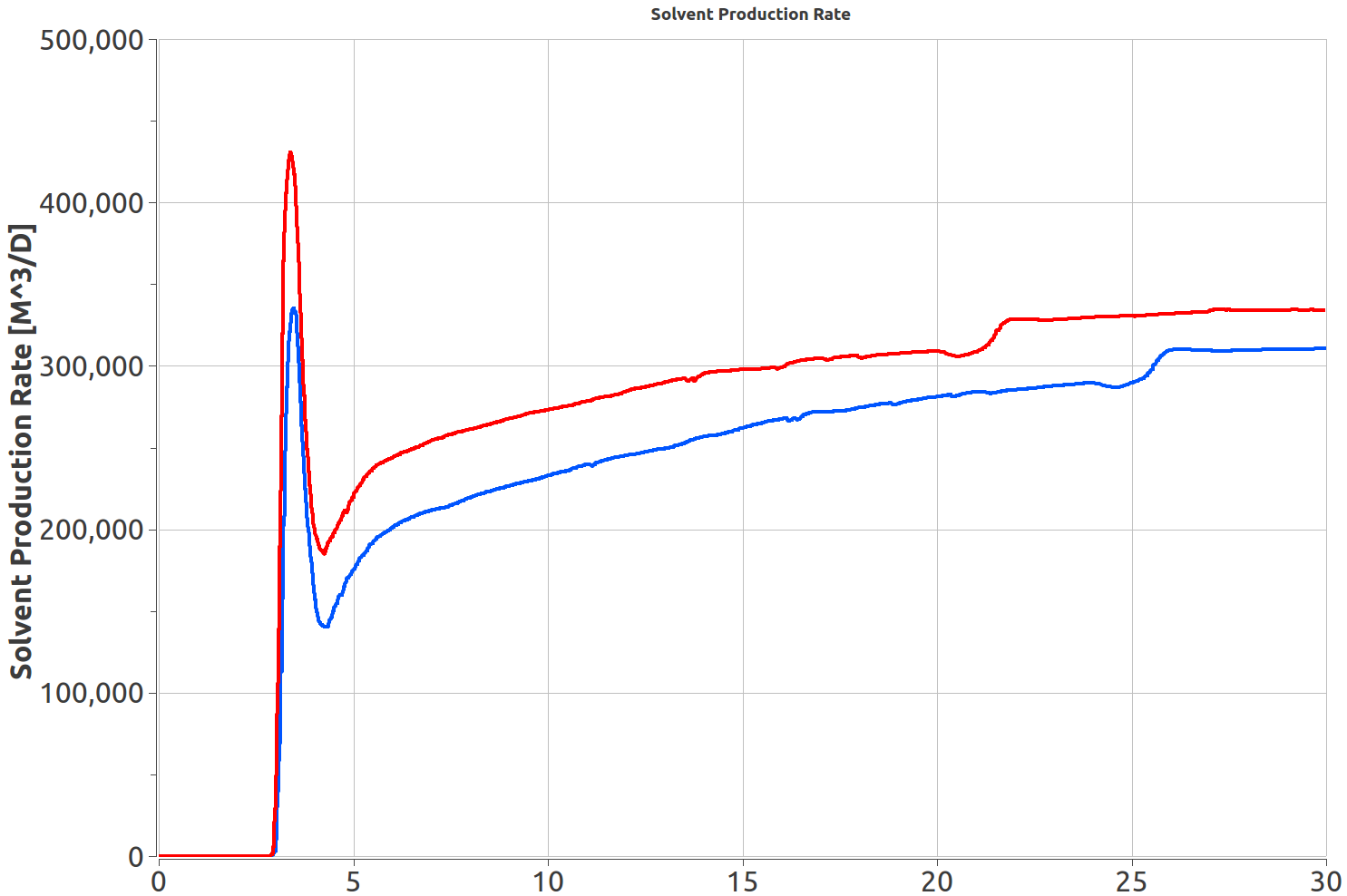 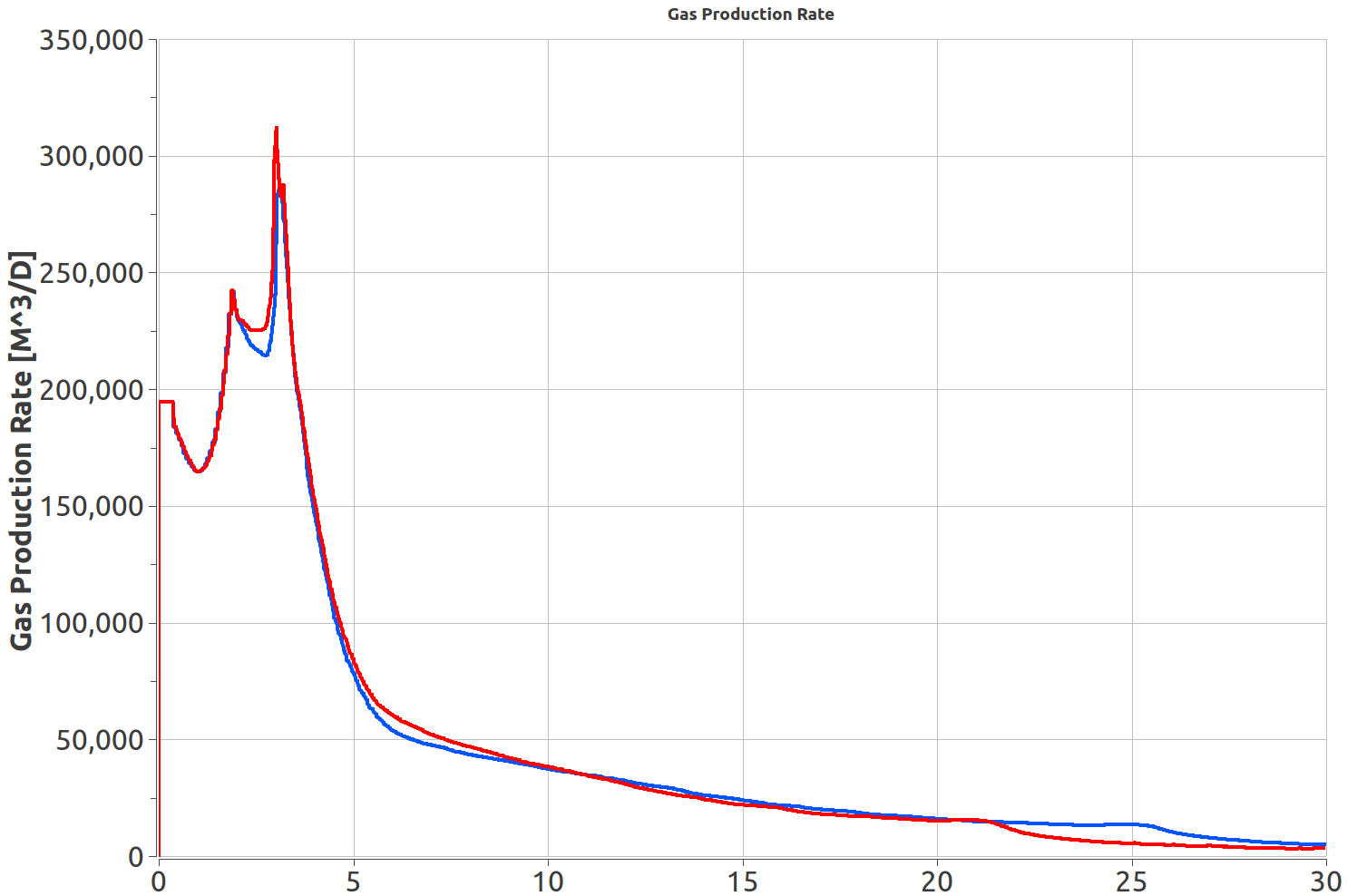 Solvent breakthrough is observed at year 3, one year after injection started in both cases. The oil production in the warm injection case is overcome by the cold injection scenario only in the last 5 years. The warm injection produces more CO2 back during the entire 30-year period.

As more solvent reservoir volume is injected by the warm injection, a better total oil production is achieved in the short and medium periods. However, would one consider a prolonged CO2 injection, as it could be for the case of storing CO2 while recovering oil, a better sweeping can be achieved and ultimately a better total oil recovery by cold injections, in agreement with [1]. The lower temperature injection also produced a lower amount of solvent back, explained by a smaller reservoir volume injected and better exploitation of the deeper layers. Temperature seems to be one of the designing parameters to consider when planning for both CO2 storage and CO2-EOR. It must be said that a stress analysis would be required to understand if thermal shock could endanger the integrity of the reservoir.

To explain the changes in solvent saturation in the top layers close to the injector, it is worth taking a close look at what happens in cell (2,1,1).

Column (2,1) shows some oil initially by-passed by the solvent flood. Here, there is some oil moving upwards as CO2 sinks. This can be better observed by looking at the saturation history of one of the top cell near the well (2,1,1) 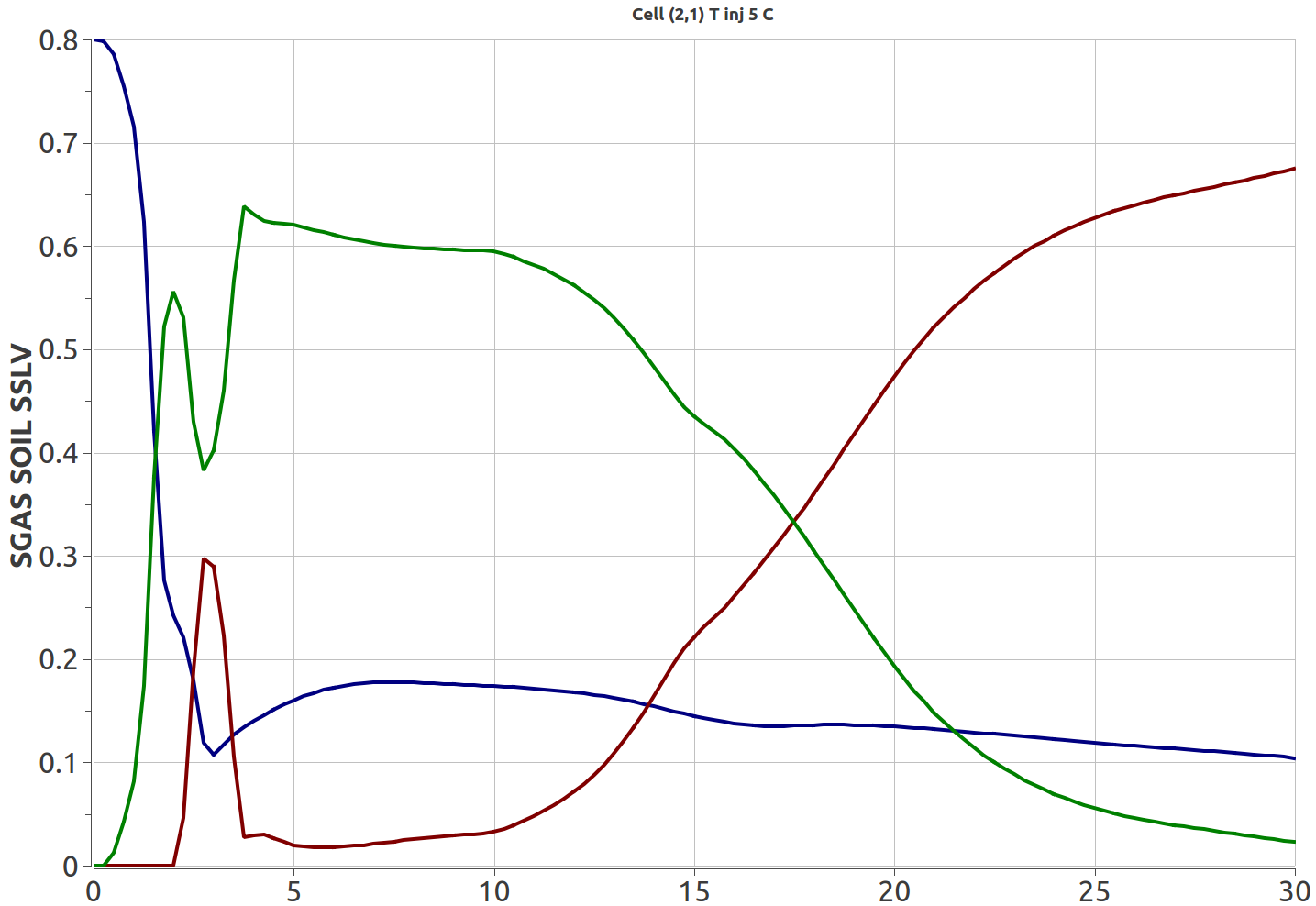 Different phases can be distinguished in the plot above: